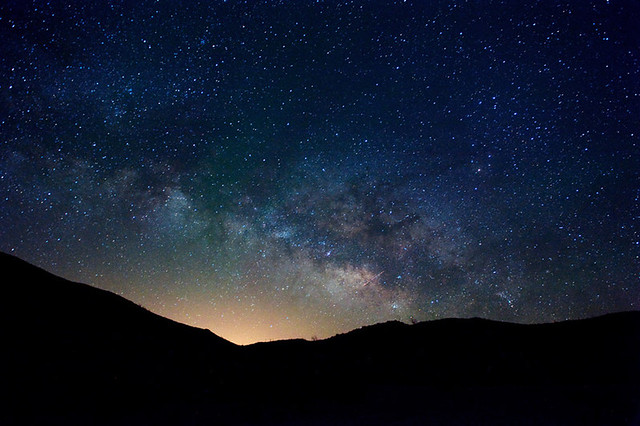 Grace was entranced by the coin in Sam’s hand. It was definitely gold. It might be a simple Sacajawea dollar — but then again it might be part of the Rivera fortune, she thought. She needed to see it up close. Gingerly, she opened the door. He didn’t seem to notice. Ever so carefully, she stepped down into the hard sand compacted from years of footsteps. The grains crunched under her bare foot.

Instantly, the coin was gone. As deftly as a magician makes a quarter disappear, it had vanished from sight. Sam tried to look startled, but she could read in his eyes that he had been listening for hours.

“Can’t sleep?” she asked. No need to be too direct.

“It’s a nice night to be alone with your thoughts,” he said. She walked over and sat down, cross-legged next to him, but not to near. Gazing up, she saw thousands of stars glittering. The horizon was dark in all directions. The nearest town was too far away and too small to pollute the night sky.

“You couldn’t pick a better spot for it,” she said. “Hundreds of constellations; all with their own stories…you could spend a lifetime recalling each one.”

“I grew up in Salt Lake City. Not too many stars there,” he said. “My mother didn’t know the stories or the language, so she couldn’t pass any of it down. I’m only just now teaching myself, to be honest.” He picked up a handful of sand and let it run through his fingers. “Besides, I’m more interested in what’s under the ground than in what’s above it.”

“That makes two of us,” Grace said, nodding. She sensed a kindred spirit in him; a hunger to understand the people who came before them. So, she decided to switch tactics. “Where did you get the coin, Sam?”

“What coin?” he asked. He was totally nonchalant, but she didn’t let him avert his eyes.

“I’m not going to take it from you,” she said. “Did you find it when you were exploring for oil near here?”

Sam was quiet for a while. Grace waited. Silence didn’t bother her. Finally, he seemed to come to a decision about her.

“Family heirloom, actually,” he said. “But I don’t know much about it.”

“Can I see it?” she said. He hesitated for a just a moment, then produced the coin from behind the elbow he was propped up on. He held it up between his thumb and index finger. Moonlight cascaded over it. Grace leaned in close to get a good look.

“It’s an eight escudo piece,” she said. “A coin minted by the Spanish in the Americas.”

Carefully, she took it from him. She lightly traced the words and images on the coin as she examined it. It was dated 1805 and was struck with the image of Charles IV of Spain in a powdered wig. It was heavily weathered and had obviously been exposed to the rigors of the elements rather than spending the centuries in the hands of a collector. She could barely contain her excitement.

“How long has this coin been in your family?” she asked as she handed it back. He tucked it away again.

“As long as anyone can remember,” he said. That wasn’t helpful information and he knew it, because he went on, “But my mother told me once that she remembered her grandfather telling her a story about a group of white men passing through who gave this to a member of our family in exchange for directions to a cave nearby.”

Grace processed this. It lined up with her theory about the priests headed back to one of the old Spanish mines to hide the Rivera fortune.

“You’re not here by accident, are you, Sam?” she asked pointedly. He smirked.

“Only partly,” he said. “The company wanted someone who already knew the area. It seemed like a good opportunity to revisit some cousins and see if I could track down that cave. I don’t suppose you’re here by chance, either.”

“I think we have a better chance at success if we pool our resources,” she replied, not bothering to answer. He probably figured it out when he plucked them from the flash flood. “You know the land. I know the history. I’ve been studying what became of Juan Rivera’s gold for the last ten years.”

“And if we find it?” he said, raising an eyebrow.

“The Spanish had no right to take it. If we find it, I’d like for it to go back to my lab for analysis and then to a good museum for everyone to enjoy. Do we have a deal?”

The next morning, Grace sat in the front seat of Sam’s truck as they rumbled down the washboard roads of Southern Utah with her feet on the dashboard and a dogeared leather folio open on her lap. Ingram was squeezed awkwardly in the middle seat while Eric slept in the bed of the truck.

Grace was reviewing the journals of a U.S. Army Captain from Massachusetts who marched into New Mexico with General Kearny in the late summer of 1846.

Not a shot was fired as we marched into Santa Fe. The streets were deserted, but everywhere I could feel the eyes of the townspeople upon us from the windows of their homes. Colonel Price dispatched me and my company of 40 men to spread out and capture the large ranch estates of the richest and most powerful citizens. My men and I arrived at the adobe house of one Eduardo Rivera, whom we were told was a leading member of the community. We entered the home to find it stripped of all its gold and silver. The old man had even cut off the buttons of his shirt and hidden them away.

Grace shuffled her papers and pulled out her map with different areas circled. With the red pencil she used for grading, she drew an X through the circle around the mine they had explored the previous day.

“I think our best bet is north, in the Henry Mountains in the foothills of Mt. Pennell or Ragged Mountain,” she said. “We know the Spanish were here during Rivera’s expedition and we know it’s remote, so anything hidden there has a good chance of being undisturbed.”

“I don’t see why we need to be dividing the loot any further, Dr. Yun,” Ingram grumbled. He had remained largely silent since Grace had announced that Sam was joining their party. “We could’ve easily overpowered him if we needed the truck.”

“I didn’t think it needed to come to that,” Grace said, shaking her head. “But if we need anything overpowered,  I’ll let you know.”

Up ahead, a range of mountains rose out of the surrounding desert. She imagined that if she was in the shoes of the priests charged with hiding the treasure from the Army of the West, this would look like the perfect place. In her gut, she had a feeling that they were close.

Jonny Eberle is a writer, photographer, and history buff living in Tacoma, WA. You can follow him on Twitter. Thanks for reading!