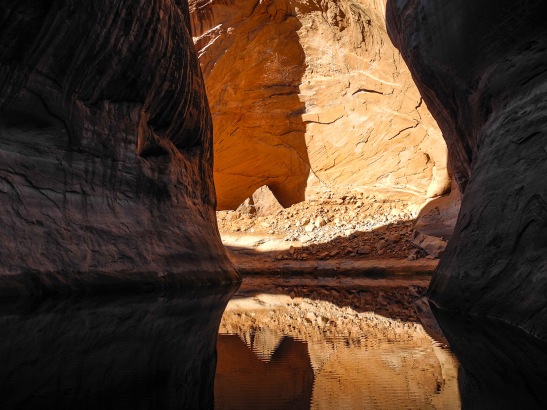 Grace paddled slowly as they entered the slot canyon. Walls of sandstone rose on either side of the flotilla of three kayaks. The sloshing of their paddles echoed.

“Are you sure this is the one, Dr. Yun?” Eric called from the back. He placed his paddle across his lap and adjusted his glasses to keep them from slipping down his nose. There were thousands of canyons in Lake Powell. Every year, as the water level dropped, more and more emerged. It was impossible to know all of them. But Grace seemed to understand the web of waterways and their secrets.

“This is the one,” she replied. She quickened her stroke, disturbing the glassy surface of the water.

“Try to keep up,” Ingram said. He twisted his thick neck to glare at the scrawny grad student. Ingram was almost too bulky to fit in his kayak — a large man with a red beard and icy blue eyes that cut like knives. He increased his pace to follow Grace around the bend in the canyon, leaving Eric in his wake.

The slot canyon continued to snake its way through the desert. The three kayakers continued in silence as the sun dipped low and cast curtains of blood-red light across the water. As they went, the canyon’s walls began to close in. The channel narrowed and narrowed.

“This feels like a dead end,” Ingram grumbled. “We are no closer to the treasure and we’ve wasted two days getting here.”

“If you’re willing to give up that easily, I suggest you turn back,” Grace said. Her voice was cool like the waters. “There won’t be another opportunity.”

“I’m not letting you out of my sight,” Ingram said. “Not until I see it with my own eyes.”

“There will be plenty to see, don’t you worry,” she said. They followed another turn, scraping the bow and the stern of their kayaks as they squeezed through the passage. “It’ll be worth it.”

Darkness fell. It was some time before moonlight spilled into their canyon enough to see the way ahead. The canyon appeared to come to an end. It was too tight to get through.

“Come on, boys,” Grace goaded them. She set her paddle down lengthwise on the kayak and used her hands to push the kayak through the slit of rock. The sides of her kayak shrieked and groaned as they scraped by. Ingram and Eric waited incredulously. Soon, Grace was lost in the shadows.

“Well, no sense stopping now, is there?” Eric asked. Following his teacher’s method, he placed his hands on either wall of the canyon and pushed himself into the crack. Ingram followed.

On the other side was a cavern of stone. It was huge, with smooth walls that formed an almost perfect dome. On the far side was a ledge ten feet wide. Above it, pale white moonlight shone through an opening to the surface.

By the time Eric and Ingram were through, Grace was already at the ledge, securing her kayak to the rock with rope. Skillfully, she climbed out and scrambled up onto dry land. The two men soon joined her.

“Flashlight,” she said. Eric fumbled for one in the many bulging pockets of his vest. Finally, he pulled the penlight free from a wad of extra socks and handed it to her. She twisted it and her features were suddenly lit in the darkness of the cave.

She began to scan the walls, until the circle of light fell on a small carving. She smirked, as if knowing where it was all along and knelt down beside it. It was worn by the years, but the symbols were still easy to identify: a cross with two hands bearing wounds to the palms.

“That’s B-level deduction, Eric,” she chastised him. “Let’s aim for at least an A-minus.”

“Well, I, uh,” he stumbled. “Missionaries. Spanish missionaries were in this area in the mid-18th century.”

“Much better,” Grace said, giving her student a pat on the back.

“That’s the coat of arms of the Franciscan Order, to be specific,” Ingram said. His gruff voice echoed in the chamber. “Which means they came from the missions near Sante Fe.”

“Very good,” Grace said. She studied it with her eyes. And when that was not enough, she reached out and traced its smooth edges with her fingers.

“Since when do you know history?”

“You thought I was just here to be the muscle, did you?”

“It’s a miracle it survived,” Grace interrupted. She didn’t have time for squabbling. “It’s been underwater for half a century.”

“So, we start digging now?” Ingram said, a wild look creeping into his eyes.

“No, the treasure isn’t here,” she said, waving her hand dismissively.

“Then why in the hell are we here?” Ingram demanded. He looked like the dog who’d just had his treat snatched away.

“This is a signpost,” Grace said. She tossed the flashlight to him and went back to start unloading the kayaks. “It means we’re on the right road.”

“How long is his going to take?” he asked, still fuming.

Grace stopped and looked at him with her own piercing, dark gaze. “I honestly don’t know,” she said. “I’ve been at it for ten years. But when we do find it, I promise you won’t be disappointed.”

Ingram didn’t say much after that. They set up camp and soon Grace and Eric were asleep. Only Ingram remained awake, twirling a sharp Bowie knife in his hand and watching the glint of moonlight over its blade…